Vocaloid is a voice-sinthiziser program that either raises or lowers the pitch of one's singing. Some of the people that are known in Japan for singing as projections at concerts are Miku Hatsune ( In Japan it is Hatsune Miku [ハツネミク]), Rin/Len Kagamine (Kagamine Rin/Len [カガミネリン／レン]), Kaito (カイト), Meiko (メイコ), Haku Yowane (Yowane Haku [ヨワネハク]), Teto Kasane (Kasane Teto [カサネテト]), Akita Neru (Neru Akita [ネルアキタ]), Miku Hatchune (Hatchune Miku [ハtチュネミク]) , and others as well. Their ages are different and so are their voices.

How do they sing so well?![edit | edit source]

The Vocaloids sing so well because their original voices are autotuned and "electrified" to sound better and have a bit of a Japanese Rap theme going on sometimes. In their music videos that can be found on YouTube, they use their voice-synthisizing microphones to edit their voices as said by some fans, but in reality, with the concerts, the audio is edited and mixed in with the projection. Their voices are edited and autotuned during music videos. They have to match the projection's lips moving.

Vocaloids are created by real people making samples of their voices and altering them. The Vocaloids as they call them, use those samples and sing them out loud. They preform their concerts as projections.

Even though they aren't real, many people go to concerts and watch them. The Vocaloids sing and dance on the projection screen while the audience watches and waves their glow sticks in the air.

Why use projections when you can use people?[edit | edit source]

The reason the owner of the Vocaloids don't have real people put on cosplays of the singers and get on stage and sing and dance to the song is because;

How popular is Vocaloid!?!?[edit | edit source]

Vocaloid is extremely popular in Japan. Now, by more and more each day, America and Europe are seeing the popularity of it as well. There have been multiple concerts in Japan featuring the projections of the Vocaloids, and some concerts in America as well. But, that's not all for Vocaloid yet. There are video games as well. One for the computer, Miku Miku Dance or, MMD for short, and Vocaloid; Project Diva for PSP as well.

MMD is a videogame where the player can control the Vocaloid and make them dance or make funny skits or parodies with them. They can also make them sing as well and preform concerts in-game. Vocaloid Project Diva has the player hit keys to match the singer's voice with his or her singing. The game features many costumes and areas to preform their concerts.

Even though Vocaloid is fun and cool to watch at concerts, it can be a hassle as well. In a concert in Mexico, they illegally used Teto Kasane in a concert. And glitches can be made during concerts as well. SInce the projections of the Vocaloids are first made by making an image from the computer and making the projection from that image from a software such as MMD can't always be glitchproof. In MMD for example, there are a series of glitches that may happen. Sometimes in concerts, they use MMD to make the projections, even though there is about a 34% chance of a glitch occuring any second. In a concert, a glitch such as hair flying around, a Vocaloid messing up lines or it's body parts moving disturbingly or clothing glitches can mess up a concert.

People don't want the concert to crash down due to glitches and waste their money on the tickets for nothing so before concerts, they check for unexpected glitches and prey for the best with the concerts.

The videogames are as fun as the concerts. So, for starters. Miku Miku Dance, or MMD for short is where the player may create in-game concerts or make funny skits or parodies with the Vocaloids. Some people post these skits on popular websites like YouTube. They can make them sing and dance as well. In Vocaloid; Project Diva, the player must try to match up the vocals that the Vocaloids make when they sing by pushing the correct buttons matching them. There are a series of costumes and concerts to play in.

The couples aren't actually officially declaired. Since in each song, it could be different. For example, Rin and Len. They could be lovers, or siblings depending on which song they are singing. Many fans think of them as lovers and many think of them as siblings. For couples, it all depends on the song. But, the fans can choose what they want to. Kaito and Miku also could be couples, but, in Secret; Black Vow, Kaito shoots Miku in the chest and kills her, proving no signs of love. Couples aren't official yet, but, fans like to believe what they believe.

Many people like to buy the cosplays and outfits that match the Vocaloids, but, what they can't buy is the vocal system. On their sleeves (Miku for example) they have buttons and wires that control their microphones where their voices change as they sing. It is pre-set before they sing. So, the fans can't buy the real electric voice system for themselves.

Here is a gallery for everyone!: 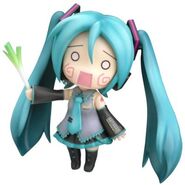 Add a photo to this gallery

Slideshow and info on how a projection is made:[edit | edit source]